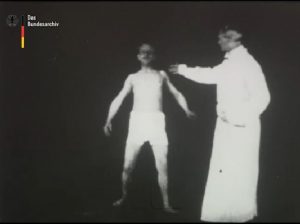 Neurological films had become increasingly common in the 1910s as projecting and recording equipment became accessible to doctors and institutions (Weiser 1919). War-time hysteria and shell-shock then lent themselves to cinematographic treatments and enforced neurological film as medium. Movement patterns were dramatic and could often be induced by skillful hypnosis–as the stark films of the neurologist Max Nonne demonstrated even in the stills (shown to the left, Wagner). Politically and professionally, it was vital to show cases of shell-shock as curable and amenable to therapy (Jones 2011, Köhne 2017, Lerner 2003) as the film excerpt from War neuroses illustrated. The unspecified ‘treatment’ worked: the movements were smoothed, contorted bodies were relaxed, walking sticks abandoned, the patient returned to function, fully-clothed and in step. Fin.

By comparison, the extant Goldstein films lacked such an ending. There was no post-treatment utopia in which disorders have been vanquished. Nor were they pressed into a moralising narrative arc that characterised films showing the neurological effects of syphilis (Podoll 2000).

They instead showed—and produced—a non-linear, probing approximation of the state of the disordered nervous system which could not be reduced to disrupted reflex arcs or a general Expressionist or fin-de-siecle worry of the nervous system gone awry.  I speculate that the hysteria films show the mind/brain being reinstated as the master governor of the body, quelling the revolutionary force of the nerves, whereas the public health film on syphilis show the mind/brain being ravished by bodily illness.

The Goldstein films do neither:  they show the embodied brain and brained body.  In those clips brain and body are entwined and twinned, not always peacefully but inextricably linked. The exercises, the patients perform, these endless loops of tilting arms and off-centred hands, give away the state of the brain–its possible cerebellar lesions, tissue changes in the frontal lobes, or frail nerve tracts–to a trained eye, but neither brain, nor body were privileged in the exchange.

Jones, E. ‘War neuroses and Arthur Hurst: a pioneering medical film about the treatment of psychiatric battle casual-ties’, Journal of the history of medicine and allied sciences 67:3 (2011): 345-373.